Two problems connected with an oxygen rich environment in sprinkler piping are ice plugs in dry pipe system types as well as corrosion in both dry and wet pipe sprinkler systems. 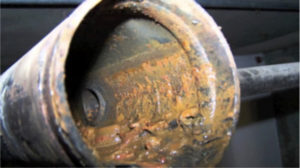 Microbiologically influenced corrosion (MIC) can be a costly and massively inconvenient problem in both dry and wet sprinkler systems. Dry systems (including pre-action) are particularly vulnerable as water is introduced (likely) annually with no way to dry the piping out. This moisture, together with oxygen causes oxidation (rust) within the piping system. As well, microorganisms can thrive within the piping; eating away at the pipe walls

This double whammy attack can render a piping system unusable due to pin holes that will leak water, air or both and requiring repair. This can become so severe that the only solution is complete replacement of the piping, usually in an occupied facility.

Less common, but still a threat, this same condition can occur in wet pipe sprinkler systems. If a system is frequently drained and filled, and/or there is no way to purge all air from the system, corrosion can attack system piping in the same way as in dry systems. 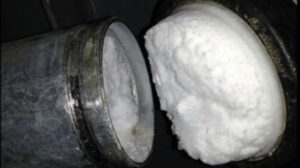 In a recent study performed by FM Global, 50% to 70% of all dry pipe system types were found to have partial to complete blockage due to ice plugs.

This phenomenon is caused by moisture in the air introduced into the system collecting and freezing on the walls of the piping which can completely close off the flow of water into the system if it’s needed. Although it can occur in other places, this blockage tends to form where the system piping passes from a warm valve room or other space into a freezer or other area that is below the freezing temperature.

NFPA 25, the standard for the inspection and testing mandates annual inspection for ice plugs and removal of all ice if found. More frequent inspections are required if ice is found to form more quickly. This can be a costly issue at best, or total failure of a system to control a fire at worst.

The most effective solution to the above problems is to fill the sprinkler piping with Nitrogen. Eliminating oxygen in system piping stops corrosion dead in it’s tracks. The nitrogen produced by most nitrogen generating systems typically has a dew point of -71°, which will positively prevent ice plugs.

Nitrogen generation systems typically include a large high pressure air compressor (125 psi), a nitrogen generator panel (consisting of controls and a membrane that produces 98% pure nitrogen) air pressure regulator and a means to purge systems until the nitrogen content in the system reaches the 98% level.

Systems are available to serve a single system or large enough to provide protection for many systems.

For more information, please contact us and we’ll be happy to work with you to solve your corrosion or ice plug issues.